Cyagen recently hosted a live webinar covering the generation of genomically humanized mouse models for applications in preclinical research. The event was presented by Dr. Marvin Ouyang, Executive Vice President and Chief Scientific Officer at Cyagen, who spoke on “Genomically Humanized Mouse Models: Generation and Application in Biomedical Research” to our live audience. Herein, we offer an extremely brief overview of the presentation and provide Dr. Ouyang’s personal responses to all the questions submitted during the webinar session. Please visit here to request a recording of the presentation.

Q1. Can you tell me the insertion size and efficiency of the TurboKnockout-Pro?

Marvin Ouyang (MO): When carefully designed (the use of appropriate lox sequences, and combination of selection markers), the efficiency of TurboKnockout-Pro is very high (~30%) for the insertion of up to 300 kb. We have successfully inserted ~1 Mb DNA sequence into mouse genome by sequential gene targeting with TurboKnockout-Pro platform.

Q2. Hi everyone, I have a question, if I say I have a drug that targets protein A, and then I express this protein on humanized mice and then give the drug to the mice, does it work the same as in humans and is it informative?

MO: Yes, the compound interaction with its target expressed in humanized mice mimic their interaction in humans, as long as the target is humanized.

Q3. If a mouse gene is replaced with a human gene, is it correct to assume that the expression level of the human gene is also equivalent to that of the mouse gene? (for example in a humanized mouse model, a protein that is low-expressed in mice will not be increased?)

MO: Gene expression level is mainly determined by the strength of its promoter and enhancer, but untranslated regions and other non-coding regions, including intronic sequences may also play important roles in gene expression by regulating RNA splicing and/or mRNA stability. So as long as the gene structure is maintained, the humanized mice should express the human gene at a level comparable to mouse gene expression. However, if human cDNA is used to replace mouse genomic DNA sequence, the human gene may be expressed at a different level, as the intronic sequence and UTRs are not intact.

Q4. In terms of off-target mutagenesis is there any difference between the traditional ES cell targeting and your improved technique? How many rounds of BC to Wt would you recommend on your 1st Het product? Any cons of your technique compared with the traditional approach?

MO: Cyagen’s proprietary TurboKnockout® platform is the choice for complex genetic modifications of the mouse genome. It combines the advantages of precise gene modification, clear IP of traditional ES cell gene targeting approach and the short turnaround time of newer CRISPR/Cas9-mediated genome editing. Like the traditional ES cell gene targeting approach, the random integration event (off-target) is excluded by the reliable Southern blot analysis. With TurboKnockout technology, F1 hets (Neo cassette-free ) will be generated from breeding of F0 founder mice with wt mice. By intercrossing F1 hets, 25% of the offspring are expected to be homozygotes, which greatly shortened the time required for animal production.

Q5. What are the advantages of using a genomic humanized mouse model to differentiate it from existing methods?

MO: Fully genomically humanized mouse models have several advantages: 1). They can better mimic physiological expression of the target, as very often the intronic sequences and untranslated sequences are involved in the regulation of gene expression; 2). They are irreplaceable tools for evaluating gene therapies when the targets are noncoding sequences. 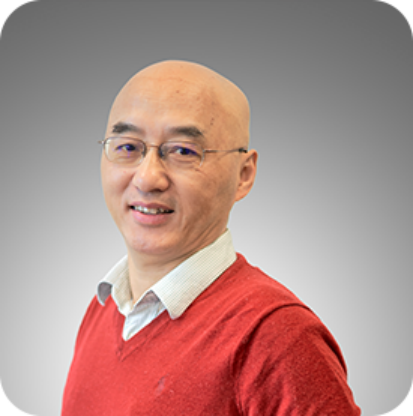 Before joining Cyagen in 2012, Dr. Ouyang served as a senior scientist at Oklahoma Medical Research Foundation, Thios Pharmaceuticals in the United States, and as Group Leader of the Molecular Biology Department of Taconic Biosciences. Over the past 20 years, he has committed himself to the custom design and generation of genetically engineered mice. While at Cyagen, he has successfully developed thousands of transgenic and gene knockout/knockin mouse and rat models for the biomedical research and drug discovery communities worldwide. He has published many papers in high-level academic journals such as PNAS and JBC; his technical services have been directly cited by Nature and other international journals hundreds of times.

About the Webinar - Watch the Recording

Success in the pharmaceutical drug development pipeline depends on basic and preclinical research practices that facilitate effective drug discovery and clinical translation. The advent of new molecular genome-altering technologies allows for genetic mutations to be introduced into the germ line of a mouse faster and less expensively than previous methods. In addition, the rapid progress in the development and use of somatic transgenesis using viral vectors, as well as manipulations of gene expression with siRNAs and antisense oligonucleotides (ASO), allow for even greater exploration into genomics and systems biology.

These technological advances come at a time when cost reductions in genome sequencing have led to the identification of pathogenic mutations in patient populations, providing unprecedented opportunities in the use of mice to model human diseases. With modern advances in genome engineering, one can make precise genomically humanized mouse models faster, more cost-effective, and on many different translationally relevant genetic backgrounds.

In this Webinar, you will learn:

Please visit here to get access to a recording of the presentation.